Why you should avoid using Wordpress 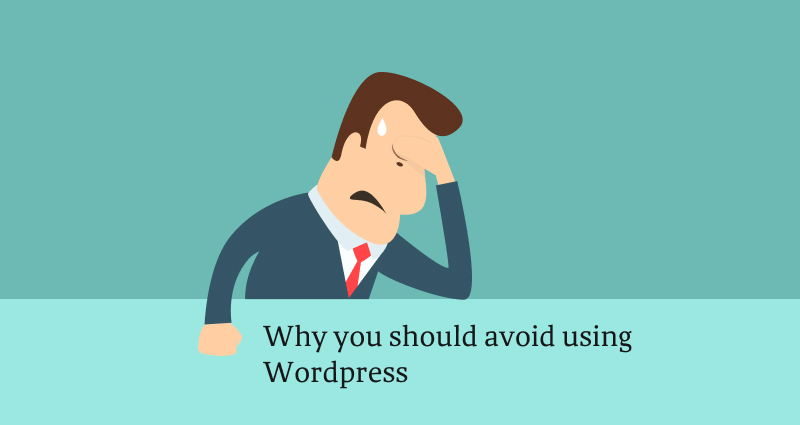 Yes, this is another article about why you shouldn't use Wordpress. These type of articles seem to be a dime a dozen. These articles have been going around the internet for over a decade. So why write an article that thousands of others have done?

For one, people still haven't gotten the message. People still seem to believe that in some cases, you have to use Wordpress for one reason or another. For another, the price of Wordpress is very enticing. I mean it is hard to beat free. We will get into that a little later.

So let's go into the reasons why you should avoid Wordpress, and talk about some alternatives that you should consider.

Why you should avoid Wordpress

Wordpress is NOT a CMS

A lot of people like to claim that Wordpress is a CMS (Content Management System), and it certainly can be with the right amount of work and plugins. But out of the box, I would not consider it to be as such. The software started out, and I would argue still is, a blogging platform. The most you ever get to manage your content is a single text box. In the world of content rich layouts with many content areas, this just simply is not enough. You can not effectively manage your content with this.

More recently they have come out with Gutenberg which allows you to place blocks that render out certain sections of markup/content into the page. I would argue that this strengthens the position of it being a blogging platform. If you have a a page with a big variety in layout on that page, Gutenberg just falls flat.

Most Wordpress developers have to rely on plugins such as Advanced Custom Fields (usually with the Pro license which costs $17) just to do any sort of website that isn't a blog.

Wordpress developers have tried their hardest to make it viable as a CMS, but usually rely on plugin developers to fill the extremely large gaps. More on that later.

Wordpress may be free, but it's price is high

There is a difference between Price and Cost.

The initial price of Wordpress might be free, but the cost to develop on it, plugins, and maintenance might not be so clear or up front. Like mentioned previously, the Pro version of Advanced Custom Fields which is almost mandatory at this point has a fee associated with it. There are many other plugins that also have some sort of fee associated with it that you might want to think about.

Another thing to think about is development costs. Wordpress can be extremely finicky to work with (though people who work exclusively with it will tell you otherwise). The fact of the matter is, is that while there are some who are really good at working on Wordpress, they are usually expensive or don't know that there are other CMS solutions that can be developed on much quicker and more efficiently.

In the year 2019, Wordpress was controlling 34% of all websites on the web. That is certainly impressive. However not only is the marketshare in decline, but it comes with it some strong negatives.

Its popularity has made it a prime target of hackers. Because of its large marketshare, development has to be slow and methodical to avoid breaking everyone's websites and plugins. As a result the code base is bloated and old. New features are rare. To make this worse, a lot of their vulnerabilities comes from plugins that use shoddy code that either are slow to be fixed, or won't be fixed at all.

Built on plugin structure, because of lack of features

Speaking of plugins, you pretty much have to use plugins if you plan on doing anything more advanced than a simple blog. Do you need a contact form? Need a plugin for that. How about an easy way to control SEO? Plugin. Backups? Plugin. Analytics? Plugin. Cache control? Plugin. Just like there is an app for everything; in Wordpress there is a plugin for everything.

Ask someone how to do something in Wordpress, the usual response is to use a plugin. It's pretty comical at this point. Wordpress just doesn't come with much functionality out of the box. This is confusing considering all of the code that there is.

Since most of the functionality of the site relies on plugins, each one of those plugins has their own developer, support structure, and QA process. More times than not the process that these developers go through lack a good QA (Quality Assurance) flow. If a breaking bug gets into your site, it very well could bring your entire site down. I have seen this far too often. Having your site working or not, shouldn't rely on a 3rd party developer.

Support for a platform is crucial. Wordpress support is very limited and almost always relies on community. The only way to get customer support is if you pay for a wordpress.com site. For everything else, you rely on the community which you will get a million different ways to fix your issue with all degrees of success.

Wordpress alternative and what you SHOULD be using

In todays age of technology, there really isn't a good reason to be using Wordpress unless you need a simple blog that you already have a theme for. For everything else, there are already a ton of not only good, but better alternatives you honestly should be using instead.

This is actually my preferred platform. Statamic (combination of Static and Dynamic) is built using Laravel and is 100% flat file. This means that there is no database. You would be surprised what you don't need a database for. It stores all of it's data in markdown files. The advantage to this is that it makes your site incredibly fast. Another advantage is that the entire site can be version controlled making updating and multi developer solutions a breeze.

With Statamic you build out what content you need so it makes entering in your own data into the website a much more straight forward process. If you want to use a single text box, great. If you want a complex form with dozens of fields of data that you need. Perfect.

It also has built in forms, search, multi-language, advanced asset control/rendering, and more. All out of the box.

Support is also top notch. You can either use their forums called The Lodge, but you can contact the developers directly using their Discord Server. I highly recommend this CMS.

CraftCMS is much the same as Statamic except that everything is stored in databases. Focusing on custom fields and flexibility. I like this line of thinking because it separates out your data from your themes. You essentially tailer the data structure you need for your site, instead of bending your site to the CMS.

CraftCMS also has a dedicated Discord Server and StackExchange for support. If you need raw power with a database, then CraftCMS is an excellent choice.

Just because it is free, doesn't mean it can't be good.

ExpressionEngine just recently went open source. What this means is that you get quality software for no cost. Unlike Wordpress which is also free, ExpressionEngine use to be commercial software (before it went open source) so it has the history of being feature rich. The same holds true now. The design of the CMS has fallen out of date but it is still very powerful. Much like CraftCMS and Statamic you define your own content fields for pages. And also like CraftCMS it stores everything in a database. Support is officially supported through support plans which do cost money ($99-$499/mo). Personally I think this cost is a bit on the high side.

There are many many other options that you could use to build a website such as Jekyll, Perch, or Kirby. Each website is different, so it makes sense to explore other options to manage your content.

The point of this article is to enlighten others that there are other options than Wordpress. Wordpress is usually brought up because it is what people have heard others using expecting it to be top tier software. In practice there is a lot of baggage that comes along with its free price tag. You should fit the CMS to your website, not the other way around.